‘I Don’t Know Where My Children Are’: Ethiopian Refugees Recount Horrors of War

On the 4th of November, fighting broke out in Tigray, a semi-autonomous region in northern Ethiopia that borders Sudan to the west and Eritrea to the north. Ethiopia’s Prime Minister Abiy Ahmed, who won the Nobel peace prize in 2019, launched a military campaign against the local ruling party, the Tigray People’s Liberation Front (TPLF).

The TPLF had staged regional elections two months previously, defying a nationwide ban on elections imposed as part of COVID restrictions. Abiy’s government declared the vote illegal and later accused the TPLF of trying to destabilise the nation by attacking central government military bases in Tigray. The TPLF – which has as many as 250,000 soldiers and militia acting under its regional commanders – denies staging the attacks.

Ethiopian federal forces claim to have taken the regional capital of Mekelle, but TPLF leaders have vowed to fight on, raising the prospect of a guerrilla insurgency. What is certain is that a month after the start of the conflict, the fate of Ethiopia’s Tigray region and its people lies in the hands of the powerful. Aid agencies have warned of a massive humanitarian crisis in the north of the country. More than 38,000 Ethiopians have fled to seek refuge in Sudan, according to the UN, with the organisation preparing to host as many as 200,000 refugees and warning an additional 1.1 million people may need aid in Tigray and two neighbouring regions due to the conflict.

Stories of shocking violence are emerging from civilians who have fled their homeland. With access to Tigray incredibly restricted it’s currently virtually impossible to verify the claims or harrowing stories of violence, but accounts of atrocities match up between people in different camps who fled from the same areas.

“The soldiers came in the middle of the day and started to kill young men,” said Giray Seyfu, 24, who worked in agricultural irrigation in Mai Kadra, a town in northern Tigray. He had just arrived at Village 8, one of three refugee camps hosting new arrivals from northern Ethiopia.

“They stormed the town, hacked people with knives, shot bullets and beat people to death with sticks. I must have seen about 130 people dead. We had to run,” Seyfu said.

Since the start of the conflict, the Ethiopian federal government has blocked journalists from accessing Tigray, and mobile phone communications have been cut off. After weeks of lobbying Addis Ababa, the UN said last week that it had been granted “unimpeded, sustained and secure” humanitarian access to the parts of Tigray that are now under federal control. But on Friday, the UN claimed that aid is being delayed due to continued fighting, deepening concerns that millions living in the region are not getting vital supplies of food and medicine.

“They specially targeted civilian men and if there was a TPLF soldier they killed him too,” Seyfu said, as young men stood in tight, single file behind him, waiting to get registered. “I saw them kill a disabled man. The women were arrested and sent to prison. I saw that two boys under 15 had also been killed.”

Seyfu fled into the surrounding fields around Mai Kadra and played a terrifying game of cat and mouse with soldiers.

“They stalked us at night on foot. It took eleven day of hiding before I reached the border at Lugdi,” he said, referring to one of the access points into Sudan, where more that 12,000 people have sought safety.

More than 46,000 people have fled through the baking hot countryside, over the Sudanese border to register as refugees in three different refugee camps, according to The United Nations’ Refugee Agency (UNHCR)

Mekds Brehani looked desperate as the moon rose over Um Raquba, another refugee settlement that has swollen to accommodate over 11,000 arrivals since the conflict started. Brehani also escaped Mai Kadra on foot as the bloodshed started, but in the chaos, she told VICE World News that she lost her one-year old son and eight-year-old daughter.

“They were stabbing pregnant ladies in the stomach,” she said, her eyes wide and glassy. “I can’t sleep – I don’t know where my children are.”

Nearby, Shushay Nbirhane, 25, showed his bandaged leg, where he said a bullet passed through. “They said they were going to shoot me in the head but they just took my phone and my money – I don’t know why,” Nbirhane said. “I left my parents there – and without phones working I don’t know what happened to them.”

Many of the refugees claimed that Abiy’s Ethiopian National Defence Force were joined by militia from the neighbouring Amhara Region to the south, which has a long-running land dispute with Tigray, and the Eritrean military from the north.

Refugees from rural Western Tigray say that the Amhara militia men raided the animals and the crops and the household materials as they took control around Humera, a city on the border with Sudan.

Last week, Abiy told Ethiopia’s national parliament that state soldiers did not kill any civilians in Tigray. However, as Ethiopian forces took control of Mekelle, the Red Cross reported that 80 percent of people in hospitals had trauma injuries from unspecified causes, and supplies of body bags were running low.

There have been reports of atrocities from both sides, with the Ethiopian Human Rights Commission reporting that the TPLF massacred 600 ethnic Amharas living in Tigray as they retreated from Mai Kadra during the federal military’s advance. In mid-November, the TPLF confirmed that it was responsible for bombing the Eritrean capital.

“Bombs were landing around the hospital, they were targeting factories and hospitals and I knew that I’d be killed if I stayed,” said Kidanen Hiluf, a public health worker in the Hashama refugee settlement. Hiluf is one of two civil servants who told VICE World News that TPLF civil servants were being targeted and killed.

“I picked up my colleagues and their families and we fled together, about 25 of us packed in an ambulance from the hospital. Four of my friends in Humera died in the violence, and if I stayed I would have been killed too.”

Since mid-November, Hiluf and 40 other health care professionals have set up free medical facilities to help other refugees.

From the makeshift clinic, Hiluf said he wants a new life and will seek work as a doctor abroad. “The sound of the bombs goes through my mind when I’m trying to sleep at night – and I can’t stop thinking about the people that died, those friends that I have lost.”

Al Rashid Al Dau, director of the Commissioner for Refugees (COR) office in Village 8, said there is enough food to feed the near 16,000 refugees in the settlement, but they are in dire need of essential medical supplies.

Later, a man with a microphone translated from Sudanese Arabic to Tigrayan for new arrivals who have come on the back of a trailer. “I’m Tigrayan but I was born in Sudan’s capital, Khartoum,” Abraham Burhano Mabraduh said. His parents fled war in Tigray in the 70s and 80s when the TPLF was fighting for control of government from a military junta know as the Derg. “We went back to live in Tigray years ago and now I’m back in Sudan again,” Mabraduh added.

Mabraduh, who escaped from Humera, said that the TPLF had captured soldiers who were dressed in Ethiopian military uniforms but were suspected of being Eritrean.

“I can’t tell you the atrocities that I saw in Humera as we fled,” Mabraduh said, the megaphone dangling from his hands as another tranche of refugees arrive behind him. “Pregnant women’s stomachs were being opened and I saw a body being dragged by the neck behind a motor bike and four dead children whose necks had been cut.”

As the fighting continues, security experts warn that the future of the region and its people hangs in the balance. “Much will depend on whether Abiy pursues a political settlement and addresses the deep discontent this conflict has stirred, not just in Tigray but among his other ethno-nationalist opponents,” said Murithi Mutiga, the project director for the Horn of Africa at the International Crisis Group.

The TPLF has significant military experience and know-how in the region. It’s possible it may have staged a strategic defeat in the regional capital Mekelle and preserved its fighting power.

“The mountainous terrain offers good conditions for an insurgency and the TPLF will hope a protracted battle may increase the appetite for compromise on the Addis Ababa side,” Mutiga said.

Life is hard for many refugees in the camps. People are crammed together in houses, tents or makeshift shelters, and taking COVID-19 safety precautions is near impossible.

Rows of small concrete shelters in Village 8, originally built to rehouse people displaced by Ethiopia’s hydroelectric dam, are now occupied by Tigrayans. Atsede Abraha, who also fled the violence in Mai Kadra, sat next to one of them in the dust with her family of four children. She had a small restaurant in the town and her husband worked in the farming and truck business.

“We ran with just our cloth on our bodies,” she said. “I haven’t seen or heard from my husband since.” Waiting for news of peace or signs of loved ones, all around the camp refugees shelter in slithers of shade cast by the blazing hot afternoon sun.

“I don’t know what will happen,” said Abraha. “I’d like to return to the good life we had before.” 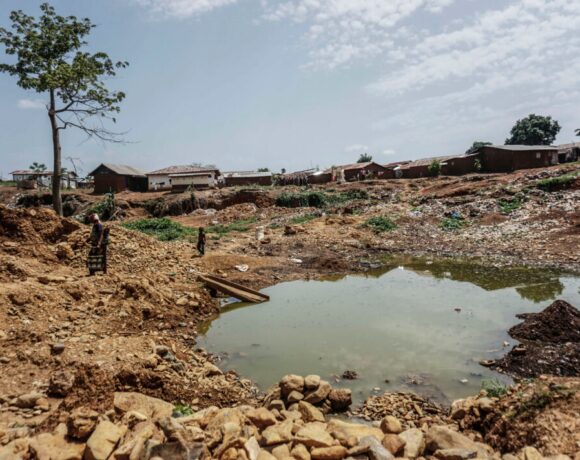 Sierra Leoneans want a share of mining profits, or they want compensation