Turkey protested to Germany and the EU on Monday after German forces belonging to an EU military mission boarded and tried to search a Turkish cargo ship that they suspected of taking weapons to Libya illegally.

Soldiers from the frigate Hamburg, part of an EU mission enforcing a U.N. arms embargo, boarded the Roseline A overnight but withdrew after Turkey raised objections with the EU mission, which had ordered the search, the German Defence Ministry said.

Turkey released footage showing armed men in military uniform marshalling sailors with their hands on their heads on the bridge of what it said was the Roseline A, at sea southwest of the Greek Peloponnese peninsula.

The incident comes at a time of friction between Turkey and the European Union. The EU’s foreign policy chief has said ties are reaching a “watershed moment” over Turkish oil prospecting in waters claimed by Greece and Cyprus, and that sanctions could be imposed next month.

Ankara said the vessel was carrying humanitarian aid and that the Hamburg had violated international law by not waiting for permission from Turkish authorities to board. It summoned the EU, German and Italian ambassadors to hear a protest.

But Germany said that, after four hours had passed with no reply to a request to board, it was standard practice to consider this as implicit permission. “All procedures were followed correctly,” a Foreign Ministry spokeswoman said.

The German Defence Ministry said the soldiers had not found anything suspicious by the time they were ordered off the ship.

Turkey is backing the internationally recognised government in Libya in its fight against Russian- and Egyptian-backed rebels in the east.

Turkish Foreign Ministry spokesman Hami Aksoy said the Roseline’s captain had shared information with the Hamburg about his ship’s freight and its course.

“Despite this, at 17:45, armed forces from the Irini Operation boarded the ship and carried out a ‘monitoring’ that lasted long hours,” he said.

“We protest this act, which was carried out by force and without authorisation (and) retain the right to seek compensation.”

The 16,000-tonne container ship left the Turkish port of Gemlik near Bursa last week, and was last seen heading southwest towards Libya, according to Refinitiv Eikon data. 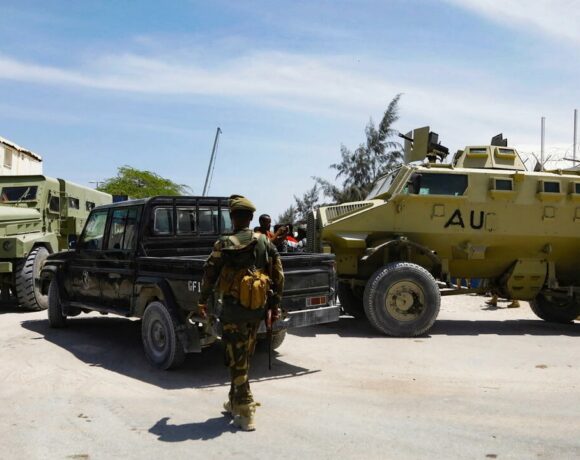