The forces loyal to the UN-backed Libyan Government of National Accord (GNA) entered the city of Garyan to the south of Tripoli, Gen. Mounzer Khartoush, a spokesman of the 73rd infantry brigade of the main command of the Libyan National Army (LNA), led by Field Marshal Khalifa Haftar, said on Thursday.

The city, located on the strategic highway to the Libyan capital, was captured by LNA in April.

“Groups of the Government of [National] Accord entered the city of Garyan after advancing on Al-Kasarat, turning to the Mashrua Abu Sheyba [park] and advancing on Qawasim. Several minutes after the attack, the Libyan National Army’s military units repelled the assault. However, major forces of the GNA military groups advanced on Garyan and entered it,” Khartoush said.

Earlier, LNA spokesman Ahmed Mismari said that LNA puts forward an initiative to hold a forum of national reconciliation once it captures the capital of Tripoli.

“The Libyan National Army is launching an initiative to end the crisis and hold a forum of national reconciliation in the country with the participation of all political forces after the liberation of Tripoli,” Mishmari said at a press conference in Benghazi, which was broadcast by satellite TV channels.

According to Mismari, all political forces can join the LNA’s initiative, except for terrorist and extremist groups. The forum should be held under UN auspices, he added.

The forum should result in the formation of an interim competent government and the setting of the date of the general election.

Earlier in the month, head of the UN-backed Tripoli-based Government of National Accord, Fayez Sarraj, presented his initiative to overcome the crisis in the country. In particular, he proposed to convene an inter-Libyan conference and develop a roadmap for the upcoming elections. All forces were also called to participate in the meeting, “except for aggressors and groups that committed war crimes.”

Since early April, the LNA has been engaged in an offensive to gain control over Tripoli. The GNA has been waging a counteroffensive to prevent the LNA from capturing the city.

Libya has been torn apart by conflict since the long-time leader Muammar Gaddafi was overthrown in 2011. The eastern part of the country is governed by the parliament, backed by the LNA and located in Tobruk. The GNA, headed by Prime Minister Fayez Sarraj, operates in the country’s west and is headquartered in Tripoli. 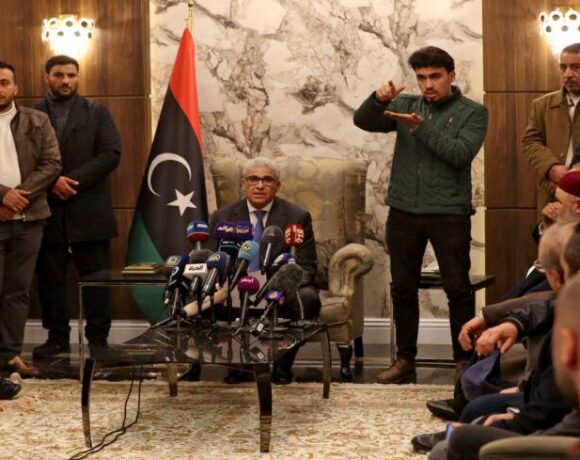