The United Nations (UN)’s envoy to Libya says self-styled commander Khalifa Haftar attempted a “coup” by issuing an arrest warrant against Prime Minister Fayez al-Serraj and other officials in the country’s internationally-recognized government.

General Haftar’s eastern-based Libyan National Army (LNA) attacked the capital, Tripoli – where Serraj’s Government of National Accord (GNA) is seated – early this month in an offensive that he has claimed is meant to eradicate “terrorism.”

UN Envoy for Libya Ghassan Salame told BBC radio on Monday that Haftar’s issuance of arrest warrants during that offensive “sounded more like a coup than counter-terrorism.”

The attack on the capital has prompted intense fighting between Haftar’s forces and those loyal to the GNA.

Salame said neither side could achieve military superiority over the other. “We are in fact in a military stalemate since eight days, or nine days [ago],” he said.

The UN envoy said both sides had carried out airstrikes that also hit civilian infrastructure and residential buildings, especially in the south of Tripoli.

The fighting has killed at least 147 people and left 614 others wounded, according to the World Health Organization (WHO). The UN agency urged “all parties to exercise restraint and avoid causing collateral damage to hospitals, ambulances, and health workers.”

The fighting prompted WHO to deploy medical teams “to support Tripoli-area hospitals as they cope with the influx of trauma cases.”

The UN High Commissioner for Refugees (UNHCR) warned about an “escalation” in the fighting, which “could create even further displacement.”

“The situation on the ground continues deteriorating and number of casualties soaring,” the UNHCR said in a tweet.

The conflict has also raised concerns about a potential rise in terrorism by such groups as Daesh.

German Chancellor Angela Merkel met the UN High Commissioner for Refugees Filippo Grandi on Monday over the Libyan situation, which she described as “very worrying.”

“It is about fighting, the causes, that lead to fleeing and displacement. [If we address that], then we will have reduced the problem. Unfortunately, we have to say the challenges remain tremendous,” she told reporters.

Merkel also said that she had had a conversation with Egyptian President Abdel Fatah el-Sisi, who has expressed his support for Haftar along with France, the United Arab Emirates (UAE), and Saudi Arabia.

According to a report published by The Wall Street Journal this weekend, Saudi Arabia has “promised tens of millions of dollars to help pay for the operation” by Haftar’s forces in Libya.

“The offer came during a visit to Saudi Arabia that was just one of several meetings Mr. Haftar had with foreign dignitaries in the weeks and days before he began the military campaign on April 4,” wrote the Journal.

Separately, Italian Prime Minister Giuseppe Conte met with the supporters of Serraj’s government in Rome, where he highlighted the need for averring “a humanitarian crisis that could be devastating, not only for the repercussions on Italy and the EU but in the interests of the Libyan people themselves.”

In recent years, Italy has been the biggest gateway for refugees trying to reach Europe through the Mediterranean and often from conflict zones in the Middle East and North Africa. It received more than 6,000 refugees per month up until 2017, according to the International Organization for Migration (IOM), which also warned that the recent conflict in Libya would be sending a great number of refugees to Europe.

Additionally, Qatar’s foreign minister also talked to Italian daily La Repubblica about the Libya conflict on Tuesday, calling for an effective arms embargo against Haftar and his troops to withdraw from areas they have recently seized.

Foreign Minister Sheikh Mohammed bin Abdulrahman al-Thani also said that he was recently told by his French counterpart that Paris was working to ensure a planned national reconciliation conference on the conflict.

Meanwhile, Prime Minister Serraj also warned that hundreds of thousands of refugees could flee the fighting due to what he described as a war of aggression and a betrayal of the people of Libya.

Speaking to the Italian newspaper Corriere della Sera, the Libyan prime minister said on Monday, “We are facing a war of aggression that will spread its cancer throughout the Mediterranean, Italy, and Europe.”

“We need to be united and firm in blocking the war of aggression of Haftar, a man who has betrayed Libya and the international community,” he said. 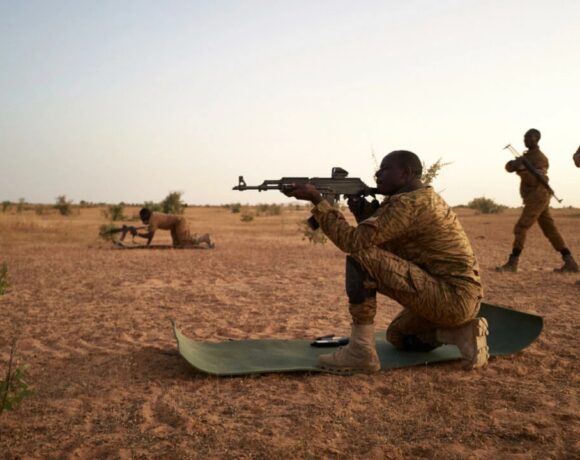